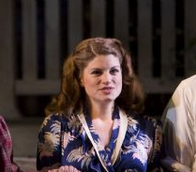 It would be easy to mistake Ann for a sweet innocent girl. She’s described as gentle, and the characters go on and on about her pretty looks. The first thing she does on her first entrace is laugh. She spends three weeks salary on a dress, on a whim. Growing up has not made Ann bitter, as it has Sue, nor has it made her desperate. She wants to marry Chris for love and companionship – not for his money.

But Ann is a strong woman. She knows want she wants and she is not easily swayed. Not only that but she displays a strength of purpose in getting it. Ann never once wavers in Kate’s questioning about her feelings for Larry. She is not waiting for him to come home. No matter how hard Kate tries, Ann will not be bullied. Ann has brought her letter from Larry, a letter no one knows about, and when all else fails in persuading Kate, she brings it out when ethe Keller’s are at their lowest.

Further, Ann has disowned her father. She is completely convinced of his guilt and feels no guilt herself in refusing to see or talk to him: ‘It’s wrong to pity a man like that. Father or no father, there’s only one way to look at him.’ (Act One)

Sweetness and steel are wonderful contrasting characteristics in a character.